Try The Only Cheddar Cheese That’s Made in Cheddar

Britain’s best-known cheese is named after the Somerset village of Cheddar. Although it’s now made all over the world and the name has no legal protection, the Cheddar Gorge Cheese Company is the only dairy still to make it in Cheddar itself. Visit the Cheddar Gorge Cheese Company to watch this world famous cheese being made.

There’s no escaping the fact that the village of Cheddar is very touristy so it may not be your cup of tea. But it does have a rightful claim to a slice of Cheddar cheese history which is fascinating. Before you pick up a packet in the supermarket without a second thought, make a trip to the dairy to watch it being made and then go down inside Cheddar Gorge where you can literally smell it ripening in the ancient caves.

Its original production started as a way of using up leftover milk. Local dairy farmers would work as a co-operative to produce one large cheese which would take months to mature. For Queen Victoria’s wedding, an enormous Cheddar drum was produced using the milk of over 700 cows giving it a 3 metre wide diameter. What makes Cheddar so distinctive is the way that it’s made, a process that’s known as ‘Cheddaring’ which normally takes 8 hours. The curd is cut into pieces, layered and then pressed so that the whey drains away. The result – the cheese lasts much longer. At the Cheddar Gorge Cheese Company, they have a special viewing gallery where you can see this process in action and then taste the cheese afterwards. Their cheese is made with unpasteurised milk to retain the characteristics of the local pastures and it develops a rind as it matures. What makes the company even more unique today is that some of its Cheddar is matured for 11-12 months in Gough’s Cave in the heart of Cheddar Gorge giving it a unique flavour and texture. So if you decide to visit Britain’s biggest gorge which is a major tourist attraction, you can literally smell the cheese maturing in the caves.

Add cheese rind to the pan when making stock to give it extra flavour.

Where to Stay in Somerset 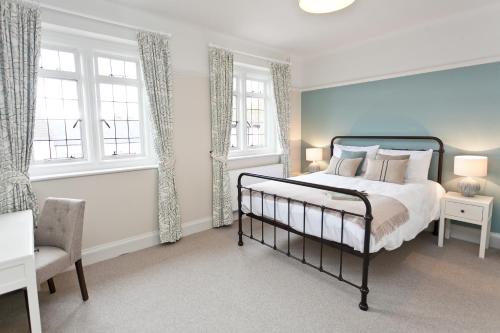 Offering a restaurant and a bar, The Bath Arms Hotel is located in the picturesque village of Cheddar.

VIEW ALL PLACES TO STAY IN SOMERSET >

How to Find The Cheddar Gorge Cheese Company