Snape Maltings was once an important centre for Britain’s brewing industry. It’s now known as a cultural destination and a mecca for foodies with its September Food Festival, Suffolk Food Hall and Farmers’ Market. Snape Maltings is a unique place. With great vision these huge historic buildings, set amongst wetlands, have been transformed into a must-see destination for visitors to Suffolk.

It offers something for everyone – culture, nature and great food. I loved browsing the impressive Food Hall, tasting Suffolk produce and walking the coastal path to Aldeburgh.

Visit in September for the Aldeburgh Food Festival. Along with Dartmouth Food Festival, it’s one of my personal favourites and worthy of a weekend away in this lovely part of the country.

Back in the 1800s, Newson Garrett, an entrepreneurial Victorian, recognised that he could use the River Alde to transport barley across Britain on Thames Barges.

He built the Maltings at Snape and, as demand from the London breweries grew, he began malting the barley here first.

In Snape’s large House & Garden Emporium, you can still see some of the tools used and the actual floor where the barley was malted, a process which halts germination to lock flavour in. The Victorian granary buildings have been converted into shops and cafés The historic buildings at Snape Maltings cover a 7-acre site

One of the delights of visiting Snape Maltings is that year-round, you can shop for local specialities in the large and impressive Food Hall. It’s literally bursting with Suffolk produce.

Buy Stoke’s sauces (the Hoisin sauce and the Bloody Mary Ketchup are especially good). There are jars of Wilkinson’s jam from Tiptree in nearby Essex, wine from local vineyards including Gifford’s Hall, beer from St. Peter’s brewery and of course, Suffolk gin, beer and vodka from Adnams Brewery in Southwold.

At the deli counter, you can pick up packets of smoked salmon and fish paté from Pinney’s of Orford, pork from Blythe and Sutton Hoo chicken.  If you want to try some of the fantastic cheese made in Suffolk, don’t go home without buying Baron Brie, St. Jude’s and Suffolk Gold.

At the end of September, Snape Maltings comes alive as it plays host to Aldeburgh Food Festival.

It’s packed to the rafters with Suffolk’s finest food and drink producers. Historic local names such as Adnams Brewery from Southwold, and younger food stars like Pump Street Bakery in Orford, known for their fantastic sourdough bread and single origin chocolate.

Many of the nation’s leading chefs and food writers, including Angela Hartnett, Valentine Warner, Mark Hix, Tom Parker-Bowles and Rose Prince have all participated in the event. It’s great fun and less crowded than September’s Abergavenny Food Festival or Ludlow Food Festival. Buy Colourful Kitchenware in The Shop

The Kitchen Shop next to Snape Maltings Food Hall, is equally impressive.

There are colourful glasses, arty printed tea towels, oven gloves, a selection of on-trend cookbooks, simple white crockery, handy gadgets like spiralisers, and a multitude of useful and desirable products.

There’s a monthly Farmers’ Market at Snape Maltings too, usually on the first Saturday of the month, so you can meet the producers as you shop for fresh produce. Arty aprons and tea towels in the Kitchen Store Colourful glasses in the Kitchen Store

Have a Pint in Snape Maltings Pub

You can take your pick of places to eat at Snape Maltings. The Plough & Sail pub is dog-friendly and has a spacious restaurant.

It serves tasty pub classics and makes the best use of local Suffolk produce. On the menu,  Adnams beer-battered fish and chips, deep fried Baron Bigod brie served with a cranberry compote and local sausages.

For light lunches and refreshments, try the Granary Tea Room and two more cafés, one of which adjoins the Snape Maltings famous concert hall. Cafe 1885, overlooking the house and garden, is the place for a delicious cream tea.

If the sun’s shining, pick up pastries and a coffee from Pump Street Bakery in the Food Hall and picnic sitting on one of the benches overlooking the wetlands. Explore the River Alde on a boat trip If you want to stay at Snape Maltings, there are a number of luxury self catering properties to rent within the complex, some of which are dog friendly.

Nearby you’ll find the charming and traditional seaside town of Aldeburgh which has a number of small hotels and holiday cottages. 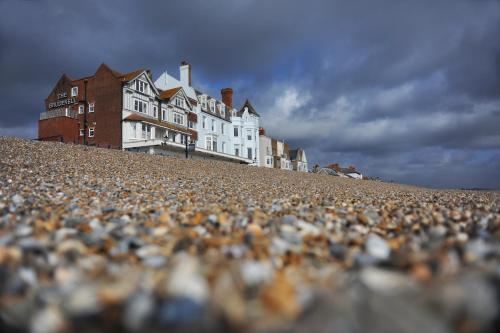 One of the best hotels in Aldeburgh is The Brudenell.  The hotel has a fantastic location right on the seafront so you can wake up with a view Aldeburgh beach.

Ready to Start Planning a Weekend Break in Suffolk? See All: Best Places to Stay in Suffolk

Snape Maltings is a fantastic place to take me for a coastal walk. I’m not allowed inside any of the shops or cafes.

How to Find Snape Maltings

Find more Foodie Things To Do in Suffolk.