Chatsworth, the 35,000 acre Derbyshire estate that is the ancestral home of the Duke of Devonshire, offers a splendid day out. For Foodie Gardeners, there’s lots of inspiration to be found walking around Chatsworth House gardens. Chatsworth will surprise and delight you in unexpected ways. You may not see Mr Darcy riding towards you on his stallion but your heart will skip a beat when you first glimpse the house from the road.

There are intriguing stories and sights to be discovered at every corner. It is truly the most welcoming of English country estates. Foodie Gardeners will especially love the Chatsworth House gardens.

Visit in summer or the early autumn to see the garden’s bounty in its full glory or at Christmas to see the house twinkling with lights and decorations.

The daily free tours of the house and the garden are excellent. What’s clear is that each generation of the family has expressed its creativity during their tenure. The late Dowager Duchess of Devonshire pioneered the Chatsworth Farm Shop, and the current Duke, has successfully introduced temporary modern art installations. They have the immediate effect of allowing visitors to relax and enjoy the juxtaposition of the old against the new.

Step Inside The Hot Houses

The hot houses are a key feature of the gardens at Chatsworth House. You’ll see peaches, nectarines and figs growing in the glasshouses. During Victorian times, the cultivation of exotic fruit was seen as a symbol of wealth. Visitors to Windsor Castle and Osborne House, will know that Prince Albert was a keen grower. In the modern greenhouse, which is an exact replica of the one in Edinburgh Botanic Garden, there’s a Citrus Limon ‘Imperial’.  A cross between a grapefruit and a lemon, it produces a large yellow fruit which is used for making Chatsworth marmalade. Peek Into The Vinery

Look through the window of the vinery, built in 1834, and you’ll see RHS prize winning Vitis Muscat ‘Alexandria’ dessert grapes. Mostly planted in the 1920s, the grapes are sold at the Chatsworth Farm Shop and at Waitrose in London.

Admire The Veg in The Kitchen Garden

Don’t miss taking a walk around the extensive Kitchen Garden. It’s cut into the hillside and affords gorgeous views of the surrounding countryside. There are rows of cold frames, arches of sweet peas, artichokes, cabbages and colourful swathes of cottage flowers including sunflowers, delphiniums and nasturtiums. Sip a Gardener’s Ale in The Courtyard

Chatsworth stables once housed a brewery which brewed beer for the main House and for the staff. It was part of their wages until 1931. Rather than carry the barrels, a lead pipe was sunk from the brew house through the garden to the house cellar. In the 1950s, they decided to uproot the lead pipe and discovered that the gardeners had tapped into it! The stables have now been converted into two restaurants but happily, the Peak Ales micro brewery is located on the estate. It’s not open to visitors but you can relax in the stable courtyard with a bottle of their Gardener’s Tap, named after those thirsty Chatsworth gardeners.

Families can visit the Farmyard and Adventure Playground with its daily talks, tractor-trailer rides and busy programme of events. Dairy cows, beef cows, sheep, pigs, goats and poultry all make an appearance. 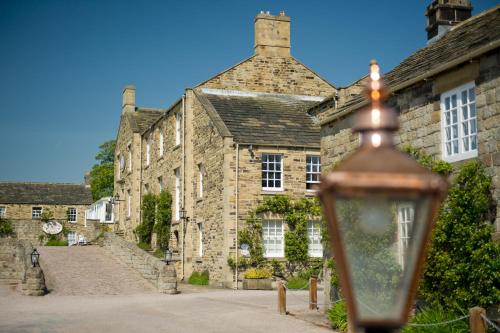 The Cavendish Hotel in Baslow is owned by the Duke of Devonshire. The 250-year old coaching inn is located on the Chatsworth House Estate.

They tell me that dogs are permitted in the garden and parkland but must be kept on a lead. Did you know there’s a pet cemetery in the garden? There are 12 sheep dogs buried there and a pet dog that was called Portly. He clearly enjoyed his food.

How to Find Chatsworth House Gardens